Is There Hope for Auto Semis?

May 6, 2020 in Semiconductor Story by Prasad Dhond
シェアする： 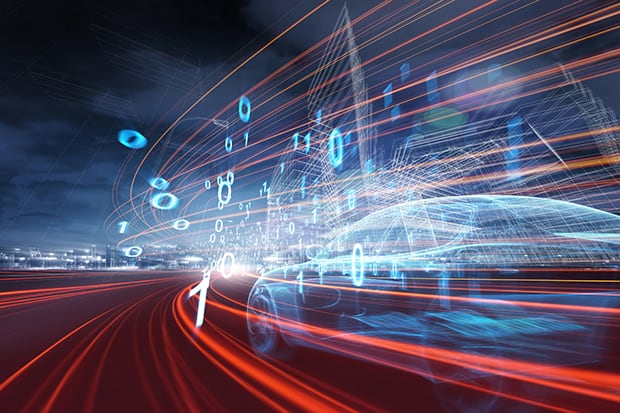 There is plenty of gloom and doom in the auto industry these days. Automotive semiconductors have become the poster child of the anticipated semiconductor downturn.

Next, the auto semiconductor leaders have announced unexciting Q1 earnings and Q2 forecasts.

Tier-1s Denso and Aisin-Seiki have joined the party and reported big drops in operating profits for the fiscal year ending March 2020. Bosch expects automotive production to fall by at least 20 percent in 2020 and “felt unable” to make a forecast for the year as a whole.

And then we have the auto OEM factories in Europe and US that have been shuttered since mid-March. In Japan, factories are open, but Toyota and Nissan announced reduced operations due to lower demand. 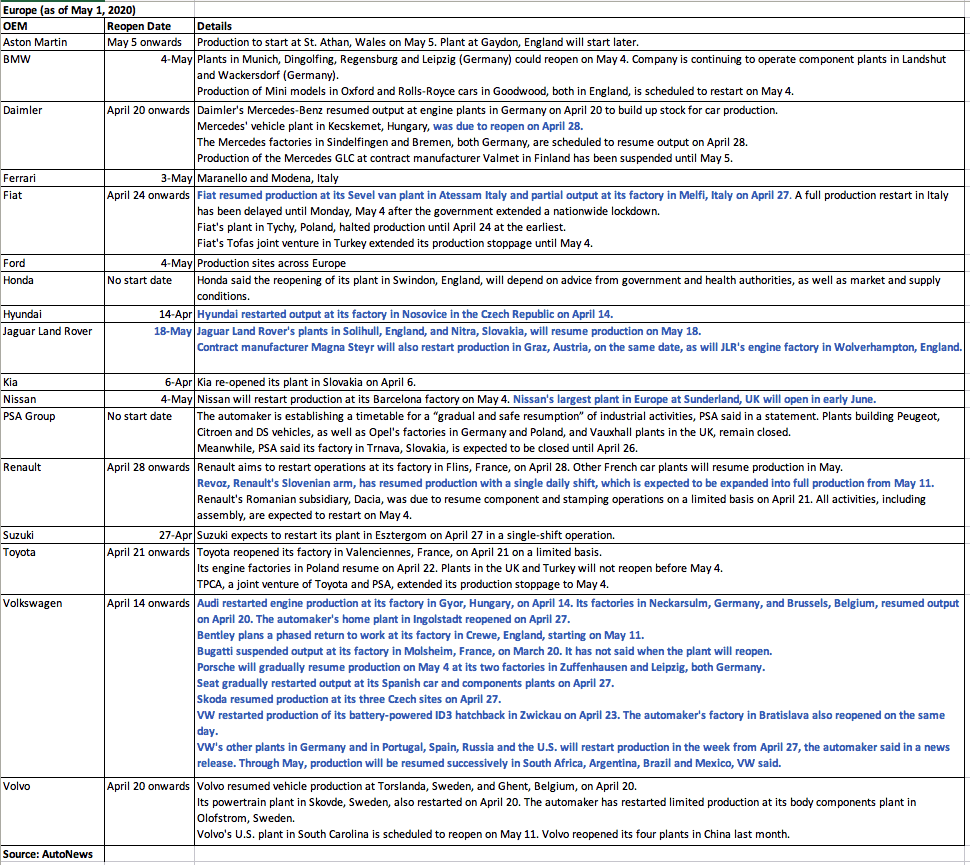 So are there any bright spots in this picture?

As China opened up, the dealerships saw robust traffic.

People were buying cars so they could avoid public transport. This could emerge as a secular positive trend for autos.

Some customers appear more motivated than before the crisis because they see personal vehicles as safer than public transport. Demand at the store is now skewed toward smaller models such as the A3, suggesting some families are buying second cars.

In the 2008-09 crisis, several governments created stimulus programs to boost auto sales. Remember “Cash for Clunkers”? It started on July 1, 2009 with initial funding of $1B that ran out in just 30 days. The government then approved an additional $2B that also ran out in 24 days. The $3B spent by the government in 2009 generated nearly $14B of auto purchases. Other countries had similar car scrappage programs. 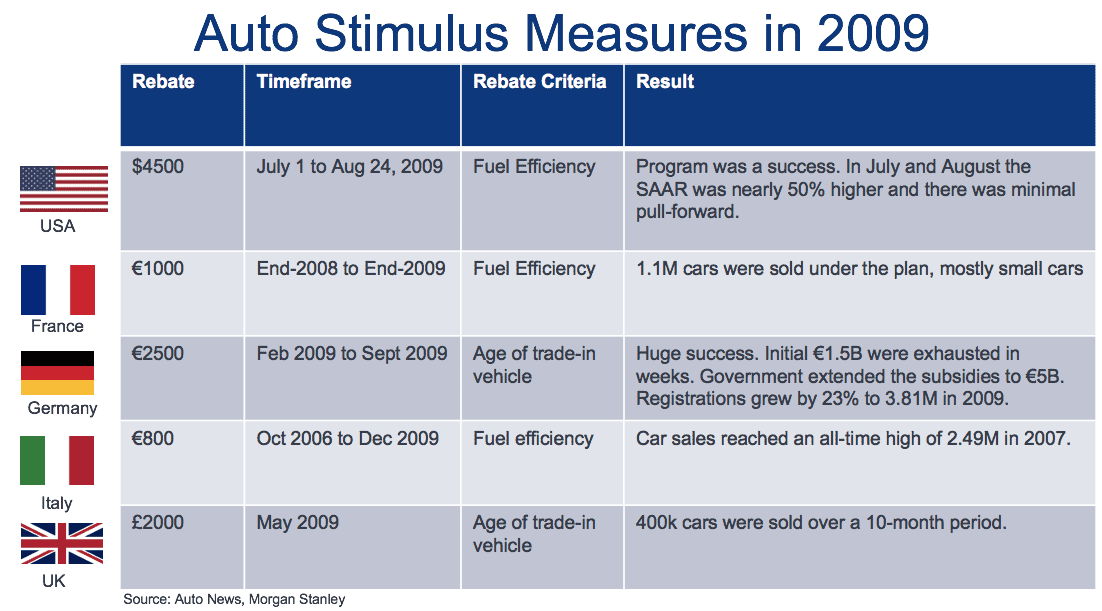 The auto industry contributes 3-3.5% of the US GDP. There are 900k auto manufacturing jobs and a total of 10-14M US jobs that are supported by autos. Auto manufacturers and suppliers are sprinkled throughout the country but especially concentrated in Michigan, Ohio, Illinois and Indiana. 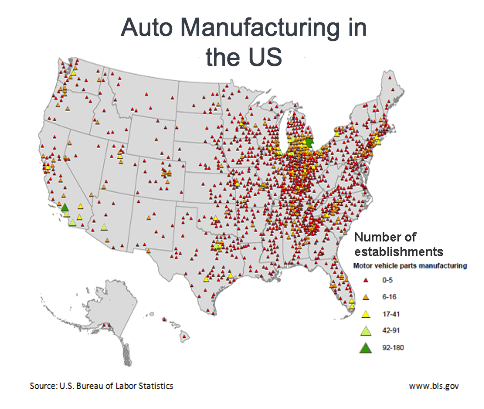 With the importance of the auto industry to the US economy, stimulus is very likely beginning in the fall and lasting into early 2021. According to Morgan Stanley, the average car on the road today is 12 years old which indicates pent-up demand. They also predict that a stimulus program in the order of $10B is likely to help improve the selling rate significantly. In the past, the focus of stimulus programs was on gas fuel economy, but this time around the stimulus is likely to also incentivize safety features which will be a boost for automotive semiconductors.

But more importantly, the auto semiconductor content story remains rock-solid. The chart below shows the semi content in an average car vs. the Tesla Model 3. The average vehicle has ~$400 of semi content. An Electric Powertrain adds nearly $600 of semi content and Level 2 ADAS adds another $650. Most cars on the road today are neither electric, nor have Level 2 ADAS. So we have a long growth runway in auto semis. 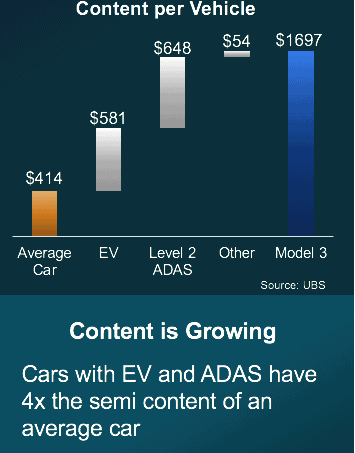 ADAS features are useful, even indispensable once you start using them (think backup cameras and blindspot detect). In addition, these features are being mandated or incentivized by regulatory agencies in different countries. The attach rate of ADAS features is only going to increase. 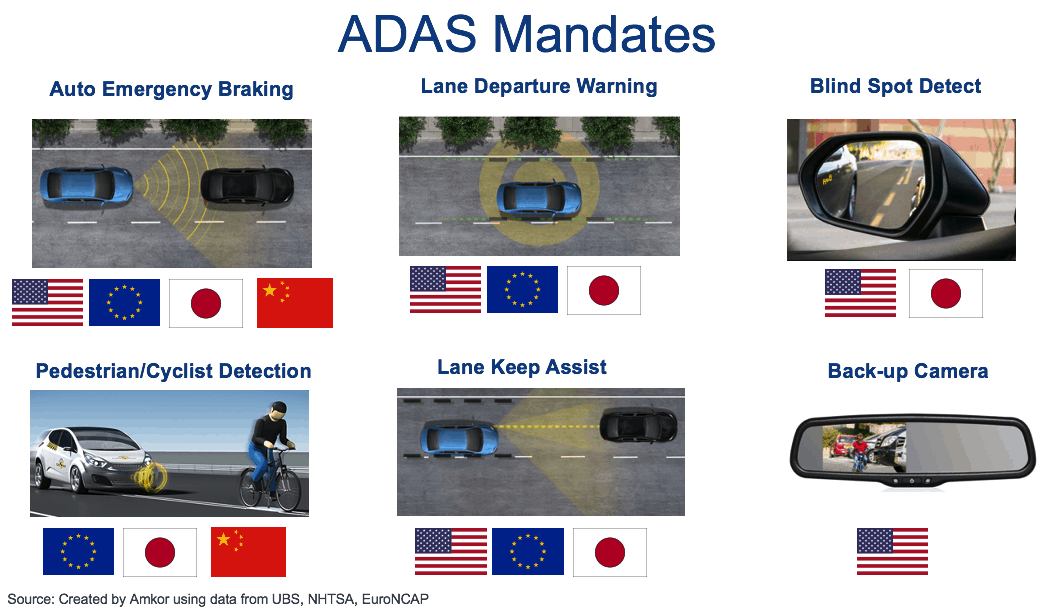 Near-term headlines for the automotive industry will be ugly. But demand for automotive electronics will come back in a big way once the dust has settled. In 2001, the auto semi market was only $10B. By 2019, it had grown 4x to $41B. In 2009, there was a temporary pause due to the financial crisis, but the growth resumed its upward march in 2010.

Past results are no guarantee of future results, but it is certain that auto semis will be much larger 10 years from now. ADAS, Infotainment and Electrification are driving increased electronic content into cars that will ensure the growth of the auto semi market. So yes, there is indeed plenty of hope for auto semis.

Disclaimer: All opinions expressed in this blog post are solely my own.

Prasad joined Amkor in 2014 and is Vice President of Amkor’s Automotive Market Segment. He previously managed the Quad and Dual Leadframe product lines. Prior to joining Amkor, Prasad worked at Texas Instruments for 12 years where he held roles in product definition and marketing in the Analog product group. He holds a BSEE degree from The University of Texas at Austin and an MBA from the Southern Methodist University. 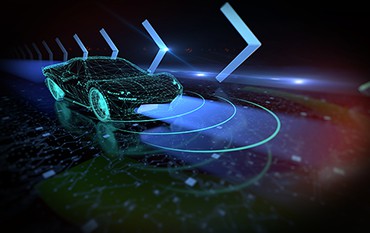 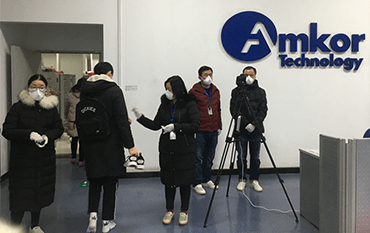 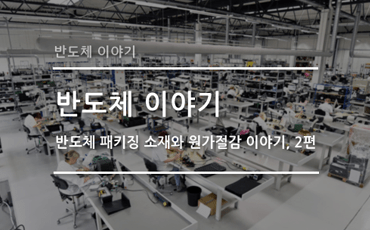